Peter the Roman, who will pasture his sheep in many tribulations, and when these things are finished, the city of seven hills [i.e. Rome] will be destroyed, and the dreadful judge will judge his people. The End.[11].

With the recent dramatic resignation of Pope Benedict XVI, speculation has run rampant as to who will replace him and why he even resigned in the first place.  Here are some of the claims I’ve come across:

Not all Catholics interpret the prophecy this way.  The Wikipedia article cited above also states,

Many analyses of the prophecy note that it is open to the interpretation that additional popes would come between the “glory of the olive” and Peter the Roman.[4][12] Popular speculation by proponents of the prophecy attach this prediction to Benedict XVI’s anticipated successor.[1]

Only time will tell if “Peter the Roman” is the next Pope (Here is one person people think may fulfill this prophecy).  However, if this claim is true, that would seem to indicate that the Roman Catholic Church views its days as numbered and drawing to a close since the prophecy says the city will be destroyed and “the dreadful judge will judge his people.”  This is interesting in light of those in the historicist camp who have fingered 2015 as the year the Lord will pour out the seventh vial of judgement.  We shall see, shan’t we?

An interesting development considering the prophesied claims of persecution:  Celebrating a Pope-Free World

And what really happened at the Friday meeting? Though held in secret, reports in the Italian press claim there was a heated argument between the men over the fraught question of how the Church should deal with clergy accused of sexual abuse.

A more plausible explanation is perhaps that constant exposure to Vatican politics had left the monkish and cerebral Benedict tired and desperate to find an escape.

I suspect that Benedict knows the restoration and cleaning up of the filth and rebellion within the Church has to continue with haste because of an ominous, rapidly growing cloud of persecution on the horizon at a time when the wisdom and inspiration of the Church will be greatly needed. Perhaps he sees clearer than most what is coming and that there is no time to have an incapacitated pope leading the Church. His resignation was a proactive action.

The Italian newspaper said that the report shocked Pope Benedict and contributed to his decision to resign.

Yesterday we learned the real reason for the Pope’s resignation: The Church has been penetrated, at its highest levels, by a homosexual embezzlement ring…

This report, Dr. Moynihan tells us, “overwhelmed his spirit within him” and “made his heart desolate.”

Ratzinger’s meeting follows upon the apparent receipt by the Vatican of a diplomatic note from an undisclosed European government on February 4, stating its intention to issue an arrest warrant for Ratzinger, who resigned from his pontificate less than a week later.

These are just some of the speculations I’ve seen.  If you know of any others, feel free to comment! 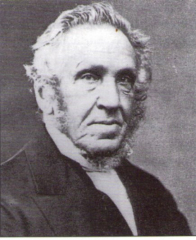 If this does not forever prove that the papacy is the antichrist, then nothing does:

The destruction of the Papacy is the special work of the exalted Mediator, and there are the most powerful reasons why He should take vengeance upon that devoted system.  Popery is essentially, and in every subject, the Antichrist – the inveterate and irreconcilable enemy of Christ.

Here is a link to a poem showing the Covenanter view of the Papacy:

Here is an interesting video series from Calvinism is Christianity:  “History the Pope Hopes You Never Learn.”

A partial summary of the series:

Today’s public school teachers want your children to learn a specific history. It is not the same history taught to our fathers. Quite a lot of changes have been made in this new history. Quite a lot of omissions have also taken place. As a result, critical components of history have not been learned by the average American child.

Today’s history teachers are selected by individuals who want a specific history taught to the public. They have reasons for teaching this history. They have an agenda.

Click the above link to read the rest and view the videos. [T]hose that have condemned me (the whole rabble of the papistical clergy) have declined from the true faith, have given ear to deceivable spirits and to doctrine of devils, are the stars fallen from the heaven to earth, are fountains without water, and finally are enemies to Christ Jesus, deniers of His virtue and horrible blasphemers of His death and passion.

And further, as that visible church had no crime whereof justly they could accuse either the Prophets either the Apostles, except their doctrine only, so have no such as seek my blood other crime to lay my charge except that I affirm, as always I offer to prove, that the religion which now is maintained by fire and sword is no less contrarious to the true religion taught and established by the Apostles than is darkness to light or the devil to God; and also that such as now…

Over 50 Islamic representatives are expected to attend the talks from several countries, including Saudi Arabia and Iran.

They will be joined by Rabbis, Hindus, Buddhists, Jains, Sikhs, a Zoroastrian, a Bahai and representatives of Taoism and Confucianism as well as of other traditional religions from Africa and America.

Revelation 17:12-14:  And the ten horns which thou sawest are ten kings, which have received no kingdom as yet; but receive power as kings one hour with the beast.  These have one mind, and shall give their power and strength unto the beast.  These shall make war with the Lamb, and the Lamb shall overcome them: for he is Lord of lords, and King of kings: and they that are with him are called, and chosen, and faithful.

Revelation 13:3:  …and all the world wondered after the beast.