I used to believe that Daniel 9:27 will be fulfilled by the Antichrist being processed by Satan during a final 7 year reign on earth just before the return of Jesus Christ. Imagine my surprise to learn Daniel 9:27 was considered a Messianic prophecy by all Protestant Christians before the 19th century! They believed it was fulfilled by Jesus Christ 2000 years ago! I came to this realization from December 2014 after holding the popular but mistaken interpretation for 40 years. It was thanks to a dear brother in Christ, David Nikao, who opened my eyes by his website: http://70thweekofdaniel.com/…

The longest continuous prophecy in the Bible is found in the 11th chapter of Daniel. It details events affecting the Jews from the 5th to the 1st centuries BCE. According to the internal dating of Daniel, it was compiled during the mid-6th century BCE. However, the prophecies found in Daniel (especially chapter 11) have caused some liberal Bible scholars to assign a much later date to the book of Daniel…

John Cassian on how the “abomination of desolation” could be applied to Antichrist:

“Wherefore on those passages which are brought forward with a  clear explanation we also can constantly lay down the meaning and boldly state our own opinions. But those which the Holy Spirit,  reserving for our meditation and exercise, has inserted in holy Scripture with veiled meaning, wishing some of them to be gathered from various proofs and conjectures, ought to be step by step and carefully brought together, so that their assertions and proofs may be arranged by the discretion of the man who is arguing or supporting them. For sometimes when a difference of opinion is expressed on one and the same subject, either view may be considered reasonable and be held without injury to the faith either firmly, or doubtfully, i.e., in such a way that neither is full belief nor absolute rejection accorded to it, and the second view need not interfere with the former, if neither of them is found to be opposed to the faith: as in this case: where Elias came in the person of John, and is again to be the precursor of the Lord’s Advent: and in the  matter of the Abomination of desolation which stood in the holy place, by means of that idol of Jupiter which, as we read, was placed in the temple in Jerusalem, and which is again to stand in the Church through the coming of Antichrist, and all those things which follow in the gospel, which we take as having been fulfilled before the captivity of Jerusalem and still to be fulfilled at the end of this world. In which matters neither view is opposed to the other, nor does the first interpretation interfere with the second.”

~THE WORKS OF JOHN CASSIAN, THE FIRST PART OF THE  CONFERENCES OF JOHN CASSIAN, THE SECOND CONFERENCE OF ABBOT SERENUS, ON PRINCIPALITIES, CHAPTER 4; Schaff (Ages Software), qtd. in Rand Windburn, “The Abomination of Desolation: Past, Present or Future? Matthew 24:1-15 Examined,” page 41, online at http://www.iconbusters.com/iconbusters/htm/catalogue/abomination_of_desolation.pdf

Israel & The Church in the Last Days on the problem with the liberal dating of the book of Daniel:

“One of the most obvious problems for liberal scholarship is presented by the existence of Septuagint, i.e. LXX, as it was the first translation of the Hebrew Bible into another language (Greek). Tradition hold that seventy men from the twelve tribes of Israel met in Alexandria, Egypt to translate the Bible at the behest of Ptolemy II 283BC-246BC. Unfortunately for these Critical Scholars the Septuagint contains the Book of Daniel 150 years before the Maccabean revolt, and to totally destroy their arguments, recently, a fragment of Daniel has been found in the cache of the Dead Sea Scrolls that dates roughly to within 50 years of Daniel’s internal date. See: New Light on the Book of Daniel from the Dead Sea Scrolls.”

This is not to mention the fact that Daniel predicts the rise of Roman Catholicism, which occurred hundreds of years after the book was quoted in the New Testament.

John Brown of Haddington in loc. on Daniel 9:

“That these verses relate to the manifestation of Jesus Christ to fulfil all righteousness, and make full atonement for the sins of his people, to fulfil all the ancient types and prophecies, and to receive the Holy Ghost above measure himself, and miraculously pour him out upon his followers, for the restraining of iniquity, and the introduction of remarkable holiness into the world, among both Jews and Gentiles, is generally agreed. That each of the weeks mentioned denotes seven years, a day for a year (Ezek. 4:6), and that the whole of the numbers is intended to point out the time of our Saviour’s appearance, is also agreed. In applying the weeks there has been great difference among calculators: but it is enough that they must all fix the conclusion of the weeks near the time of our Saviour’s death. From Ezra’s commission, by Artaxerxes Longimanus, in the 7th year of his reign, to restore the affairs of the Jewish church and state, to the death of Christ, is precisely 70 weeks, or 490 years. From Nehemiah’s commission to rebuild the wall of Jerusalem, in the 20th year of Artaxerxes, to the death of Christ, is 490 lunar years, and a little more; or perhaps precisely 490 to the rejection of the Jews, and calling of the Gentiles. From Ezra’s commission to Nehemiah’s finishing his reformation might be precisely seven weeks, or 49 years; thence to John Baptist’s manifestation (by his ministry) of Christ as come, 62 weeks, or 434 years; thence to Christ’s death another week, or seven years; — 490 in all. Perhaps, too, from Julius Caesar’s edict, for the Jews to repair and fortify their cities, to Christ’s birth, might be precisely 49 years; and as much from Herod’s building of the inner temple to Christ’s baptism; and as much from his finishing the outer temple to Christ’s death.

In the last week (ver. 27), the covenant was confirmed with many, and the daily sacrifice abolished, either by Christ’s ministrations, and the conversion of multitudes to him by the covenant of grace, and by his rendering useless all the typical sacrifices by his death; or near forty years afterward, when Titus made leagues of peace with sundry of the Asiatic nations, that he might have the more leisure to make war against the Jews; by which their temple was destroyed, their civil and ecclesiastical constitution overthrown, and themselves generally murdered or driven from the country; under the dreadful effects of which they have remained for above 1700 years past.”

And here we must just remark, that Popery did not at any time appear ready made on the world’s platform.  It was not like Mahometanism, which was constructed by one man, and brought out complete after a certain retirement from the world; but it was like the growth of a little horn, commencing with soft and unnoticed buddings, until, as time advanced, it acquired length and strength, and hardness.  In fact, the process has been very much that which we see in dissolving views; you look at one time at a given picture, and at the very time that you moat admire it, certain lines become fainter, and others stronger, so that after a while you discover that the whole landscape is completely changed.  You have had your attention fixed throughout, but the change has been so gradual, the fading and brightening of the different parts so imperceptible, that though you now see the lofty tower where a few moments back the cattle were grazing in the meadow, you are at a loss to decide when the change commenced, or what were the distinct steps of its accomplishment.  Just so it has been with Popery.  Men began by looking at Christianity; they beheld its beauty and admired it; but as they looked, a faintness gradually crept over its outline; its finest touches began insensibly to disappear; the lines of a new picture by degrees took their place, till at length the whole scene became changed, and instead of Christianity we found Popery; instead of Christ we saw Antichrist exalted in his room.

Here is another great article from Out of His Mouth.  I have always been troubled by the tendency of some interpreters to put a line partway through Daniel 11 and say that before the line talks about Antiochus Epiphanes but after the line talks about Antichrist.  Out of His Mouth shows how all of Daniel 11 can be understood to be talking about the fall of Greece and Antiochus Epiphanes.  I believe Francis Nigel Lee also made a similar case.  Here is the link to the article: 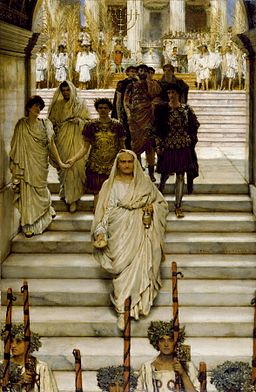 Daniel 9:24-27 is apocalyptic literature that uses figurative language to predict the nature, timing and consequences of Christ’s work at His first coming.

A fascinating discussion from Out of His Mouth on the case for an early date for the book of Revelation:

“The dating of the Book of Revelation has been a matter of no small controversy throughout the history of the church, some writers placing its authorship during the reign of Claudius (41 – 54 A.D.), others placing it during the reign of Nero (54 – 68 A.D.), and others placing it in the reign of Domitian (81 – 96 A.D.). In the realm of eschatology, Preterists choose an early date, while Dispensationalists and Historicists choose the later. It is not a matter that can be resolved by external testimony, because the external testimony itself is contradictory. But the internal evidence is quite compelling…

HOW THE WORDS OF JESUS WERE FULFILLED IN 70 A.D
(source)

Judea had always been one of the most restless and rebellious parts of the Roman Empire, and from 60 A.D. onwards the situation began to deteriorate rapidly. Felix the Roman governor was succeeded by Festus, Albinius and then Gessius Florus, a brutal tyrant whose cruelty and maladministration was bound to result in an uprising; which it soon did; Florus was driven out of Jerusalem, the fortress of Antonio was seized by the Zealots and the pro Roman faction in the Holy City was slaughtered. The revolt spread like wildfire, and when Cestius Gallus the Roman governor of Syria who had advanced on Jerusalem, suddenly retreated for no apparent reason, the Jewish Zealots went on the offensive, convinced that God was on their side…