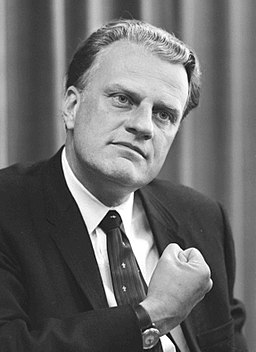 Posted by Stormer at Bible Based Ministries:

Billy Graham died on the 21st February 2018, at the age of 99.  He was, beyond question, one of the most influential men in modern history.  It has been estimated that he preached to something in the region of 200 million people, in at least 180 countries and territories of the world.  And hundreds of millions more heard him via radio, TV, film, etc., so that some estimates of the numbers he reached go as high as 2.2 billion people.[1]  Millions think of him as a wonderful Christian and the world’s greatest preacher.

But is this correct?  The Bible says, “Ye shall know them by their fruits” (Matt. 7:16).  Let us examine the doctrines and conduct of this man, to test the fruits which he produced.

There is much we could say about the false Arminian “free will gospel” which Billy Graham preached.  He always spoke of making a “decision” for Christ – he believed man’s will is free to choose to follow Christ or not.  This is why he held his famous and utterly unbiblical “altar calls” so beloved of Arminian preachers everywhere.  Instead of the biblical truth that the new birth is a sovereign work of the Holy Spirit of God (Jn. 1:13), in which the person is entirely passive, and that only when one is born again is he able to repent and believe in Christ, Graham reduced this mighty work of God to a man’s own choice, whenever it suits him, to “make a decision” for Christ.  Putting the cart before the horse, Graham (like all Arminians) claimed that when one “decides for Christ”, then he is born again.  Salvation is thus placed in the hands of fallen, impotent, sinful man, not God.  It was, and is, nothing but a lie.

It is claimed that hundreds of thousands, perhaps millions, were converted at his crusades in this way; but this is simply not true.  Numerous examples could be given, but here is just one, so representative of all the rest:

At the Graham crusade in Singapore in 1978, 20 000 “decisions for Christ” (as Arminians call them) were recorded.  But only 18 months later, when a survey was conducted of the progress of those who had recorded a “decision”, 62% of those 20 000 were first-time “commitments”, and only 49% of them (some 6076 people) ever attended a “follow-up” class or a church.  Only 1336 of them completed a follow-up course, and another 850 lost interest before they could be baptized or join a church.  Thus, a mere 18 months after the crusade, only 486 people had continued as professing “Christians”!  And what’s more, many of those 486 were attending non-Evangelical churches![2]

Were, then, those 20 000 “decisions” genuine conversions?  Certainly not.  How could they be?  No one is truly converted by “making a decision” for Christ.  No sinner, dead in sins (Eph. 2:1), can “decide” to give himself spiritual life.  A dead man can do nothing.  Regeneration is God’s work, not man’s.  Those who “decide”, who “go forward” or pray a repeat-after-me “sinner’s prayer”, fall away because they are not irresistibly drawn to Christ by the Father, for salvation (Jn. 6:44).  They have decided, but God has not drawn them.

And here is something else: Graham was not above staging his “altar calls”!  His organisation was known to have thousands of its own workers “come forward”, to create the impression of spiritual conviction, and to spur others to “come forward”!  Many of those who responded to his call, then, were “plants” in the audience, members of his own team![3]…