Jerusalem Blade from the Puritan Board:

Now we get to a different aspect of the matter. One that is not often brought into the discussion. E.R., to answer you directly, No, I do not charge or insinuate “non-KJV users with Roman Catholic tendencies”! However—and it’s a big “however”—many Reformed folks may simply be unaware of Roman Catholic involvement in the text-critical industry.

For instance, it does not inspire confidence in Reformed persons that the publishers of the Critical Text, the United Bible Societies, unabashedly serve the Vatican and the Pope, of whom UBS General Secretary Michael Perreau said,

“Pope Francis embodies several ‘first ever’ aspects: he’s the first Jesuit pope, the first Latin American pope, and the first to choose St Francis of Assisi as the patron of his papacy. He combines modesty, not least in his lifestyle, with fervent engagement for the poor, and traditional Catholic theology with courageous advocacy for human rights.

“He is a man of the universal church with an ecumenical spirit and he is a pastor, who knows the reality of ‘simple’ people. The new Pope is a truly biblical person whose faith and actions are deeply rooted in the Bible and inspired by the Word of God.”

“As a long-time friend of the Bible Societies Pope Francis knows that our raison d’être is the call to collaborate in the incarnation of our Christian faith,” says Mr Perreau. “We assure Pope Francis of our renewed availability to serve the Catholic Church in her endeavours to make the Word of God the centre of new evangelisation.”

The text shared by these two editions was adopted internationally by Bible Societies, and following an agreement between the Vatican and the United Bible Societies it has served as the basis for new translations and for revisions made under their supervision. This marks a significant step with regard to interconfessional relationships. It should naturally be understood that this text is a working text (in the sense of the century-long Nestle tradition): it is not to be considered as definitive, but as a stimulus to further efforts toward defining and verifying the text of the New Testament. For many reasons, however, the present edition has not been deemed an appropriate occasion for introducing textual changes. [Emphasis added]​ 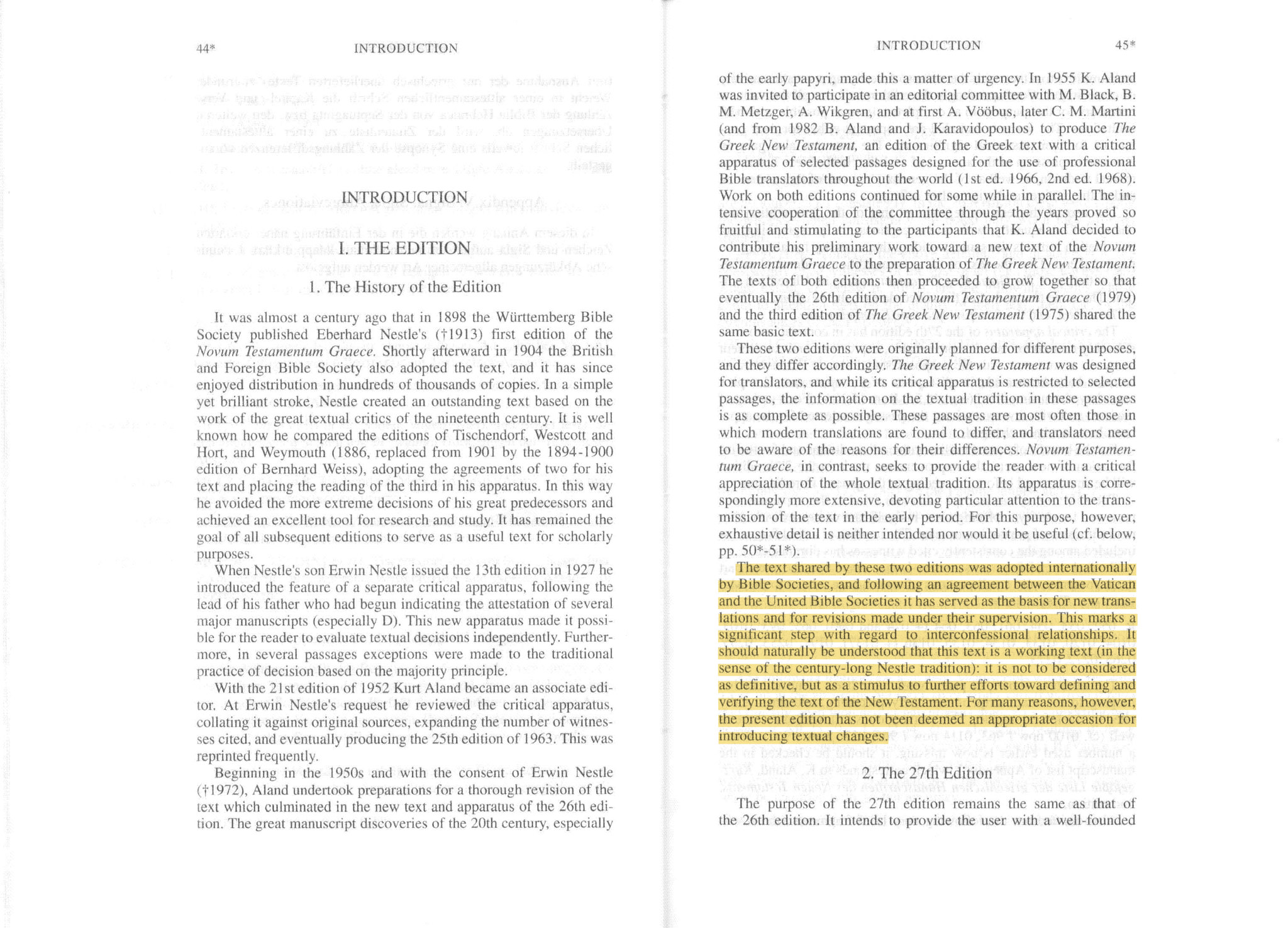 What amazes me is that good Reformed souls can fall for the Roman assault on Sola Scriptura through their prize MSS (the “Queen of the Uncials” Vaticanus is called), which is the main exemplar and basis of the Greek Critical Text, throwing into disarray the defense of the Reformation. Is it not evident? The textual conflicts among the Reformed—indeed, the entire Protestant camp—derive from the Catholic assault against Sola Scriptura via the variant-laden manuscripts they have for a long while, to this very day, promoted as the superior “neutral” text, or the superior eclectic text. Their agenda? Furthering “interconfessional relationships… under their [the Vatican’s] supervision”. What am I saying? That, in large measure, Rome has defeated the Reformation’s stand. The loss of the Reformation’s Bibles in lieu of the plethora of Critical Text Bibles—which foment the discord and confusion we see here even in this very thread—has weakened the faith in a sure and reliable word of God.

I’m not making this stuff up. If the UBS-Papal union and collaboration does not convince you, I don’t know what will. Yes, some good and scholarly men (and women) believe the CT the superior text despite the Roman connection; well and good. It remains that Rome’s agenda has succeeded: the doctrine of Sola Scriptura as the Reformation’s foundation has been destroyed. We are in disarray.

Oh, it may seem we are thriving, and individual churches (and individual souls) may seem to be so, for the time, but the Reformation ship has taken a torpedo in the hold, and the leak cannot be mended.

Some may decry what has happened, and call for folks to return to the Reformation’s textual standard, but the hole is too big. The lifeboats of local churches remain. May God our Shepherd (to change metaphors) guide us to Celestial City, using skilled and godly pastors who with wisdom take His direction.

I believe, as an amillennial proponent, that the eschaton draws near, with the preliminary judgments, catastrophes, and apostatizing, and then the global turning against the saints before His return. How long? I do not know.

This is why I hold up the Reformation Bibles: a sure word of God is our strength, and the standard of the Spirit of the LORD when the enemy comes in like a flood (Isa 59:19-21).