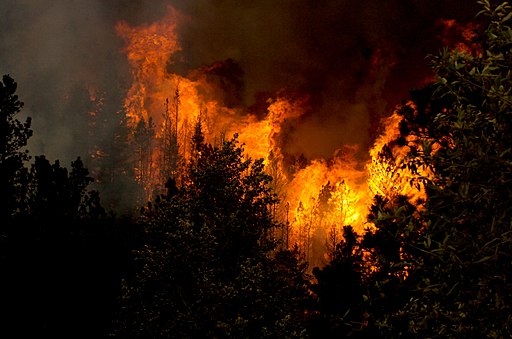 In the Scripture above, the Lord sent a curse upon the Jewish priests, and cursed their blessings.  For they were false priests.  This can mean He cursed what they had been blessed with; but also, that He cursed the blessings they pronounced on others.

The priests of Rome are false priests as well.  The only difference is that the Jewish priesthood was ordained of God for a specific time and purpose, whereas the Romish priesthood never was.  And if the Lord cursed the blessings of the Jewish priests, He most certainly curses the blessings of the priests of Rome.  Most especially, He curses that which the pope of Rome, the great high priest of the greatest false religion which has ever existed, blesses.

In June 2017 the sovereign Lord, once again, cursed what the Roman Antichrist blessed, when the worst fires in Portugal’s history swept through its central region.

Does the reader see the hand of God in what occurred in Portugal?  It should make one’s hair stand on end, and humble one into the dust before God!

For Francis I arrived in Portugal in May 2017, being welcomed by the country’s president and adoringly followed by vast crowds of Roman Catholic faithful.  His purpose for being in the country?  To “canonise” two of the three shepherd children who, at Fatima in Portugal a hundred years ago in 1917, claimed to have received visits from the Virgin Mary and messages from her.  I recently wrote a detailed article examining the so-called Fatima apparitions, entitled The Lying “Lady” of Fatima: Seers and Secrets, Deception and Delusion, and the Politics of Global Power.[1]  The reader is urged to carefully read that article.  The entire Fatima deception is all to do with increasing the power of the Vatican over the earth.

And in June – just a month after the papal visit – central Portugal experienced a series of deadly wildfires, with the largest loss of life due to such fires in Portugal’s history!  Dozens perished in the flames, many dying as they tried to flee in their cars.  So great was the catastrophe that Spain, France and Italy sent water-dropping planes, and the EU and UN also pledged assistance.  The Portuguese prime minister said, “The fire has reached a level of human tragedy that we have never seen before.”  And a local mayor of one of the affected areas said, “It does not seem real, it is out of this world…. It is a real inferno, we have never seen anything like that.”

Note: Fatima is in central Portugal!  The fires were in Pedrogao Grande, a municipality in Leiria District.  The city of Leiria is the capital of Leiria District, and is also the seat of the Roman Catholic diocese of Leiria-Fatima.  It was in fact to the bishop of Leiria that one of the Fatima child “seers”, Lucia dos Santos, entrusted the so-called “third secret” of Fatima in a sealed envelope.  She had written it down on the orders of the bishop of Leiria.

Francis I visits Fatima, being welcomed by the Portuguese president; and a month later the Portuguese president is visiting the Leiria region to meet with the families of the victims of the devastating fires.  Coincidence?  Not in the least.  It was Divine judgment.  We feel deep compassion for and sympathy with the suffering people of Portugal at such a time of great tragedy.  Truly, the hearts of all should break when they consider the extent of the suffering and pain there.  But let us not be found speaking as the foolish, the ignorant, and atheistic speak, when they start blaming God or saying such stupid things as, “How could a loving God allow this?”  or, “How can there be a God?”  When men blaspheme the sovereign Lord of heaven and earth day and night; when they worship idols in direct violation of His holy Word; when they give heed to seducing spirits and doctrines of devils, and uphold the foolish lies of human beings as if they carried equal or greater weight than the Word of the living God; when they exalt a sinful man as the “Vicar of Christ” and believe him to be the representative of God on earth; when they cry out for this wicked man’s “blessing” and hang on his every word of blasphemy and idolatry; then at some point the judgment of God must fall, and often it has fallen very swiftly.  He says: “I am the Lord: that is my name: and my glory will I not give to another, neither my praise to graven images” (Isa. 42:8).