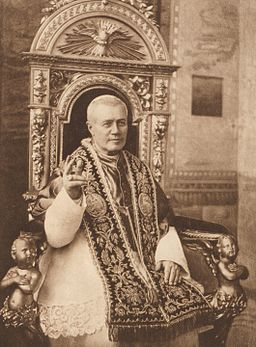 “The Pope is not simply the representative of Jesus Christ. On the contrary, he is Jesus Christ Himself, under the veil of the flesh, and who by means of a being common to humanity continues His ministry amongst men … Does the Pope speak? It is Jesus Christ Who is speaking. Does he teach? It is Jesus Christ Who teaches. Does he confer grace or pronounce an anathema? It is Jesus Christ Himself Who is pronouncing the anathema and conferring the grace. Hence consequently, when one speaks of the Pope, it is not necessary to examine, but to obey: there must be no limiting the bounds of the command, in order to suit the purpose of the individual whose obedience is demanded: there must be no cavilling at the declared will of the Pope, and so invest it with quite another than that which he has put upon it: no preconceived opinions must be brought to bear upon it: no rights must be set up against the rights of the Holy Father  to teach and command; his decisions are not to ‘be criticized, or his ordinances disputed. Therefore by Divine ordination, all, no matter how august the person may be — whether he wear a crown or be invested with the purple, or be clothed in the sacred vestments: all must be subject to Him Who has had all things put under Him.”

“It is error to believe that, if the Pope were a reprobate and an evil man and consequently a member of the devil, he has no power over the faithful.”

(Source: Council of Constance, Condemnation of Errors, against Wycliffe, Session VIII, and Hus: Session XV; DNZ:621, 617, 588, (quoted in Apostolic Digest, by Michael Malone, Book 5: “The Book of Obedience”, Chapter 1: “There is No Salvation Without Personal Submission to the Pope”))

Up to this point, Rome’s main method of attack had been largely frontal: openly burning Bibles and heretics. Yet this warfare only confirmed in the minds of Protestants the conviction that papal Rome was indeed the Beast power that would “make war with the saints” (Revelation 13:7). Therefore a new tactic was needed, something less obvious. The sought after solution was found in the Jesuit Order… 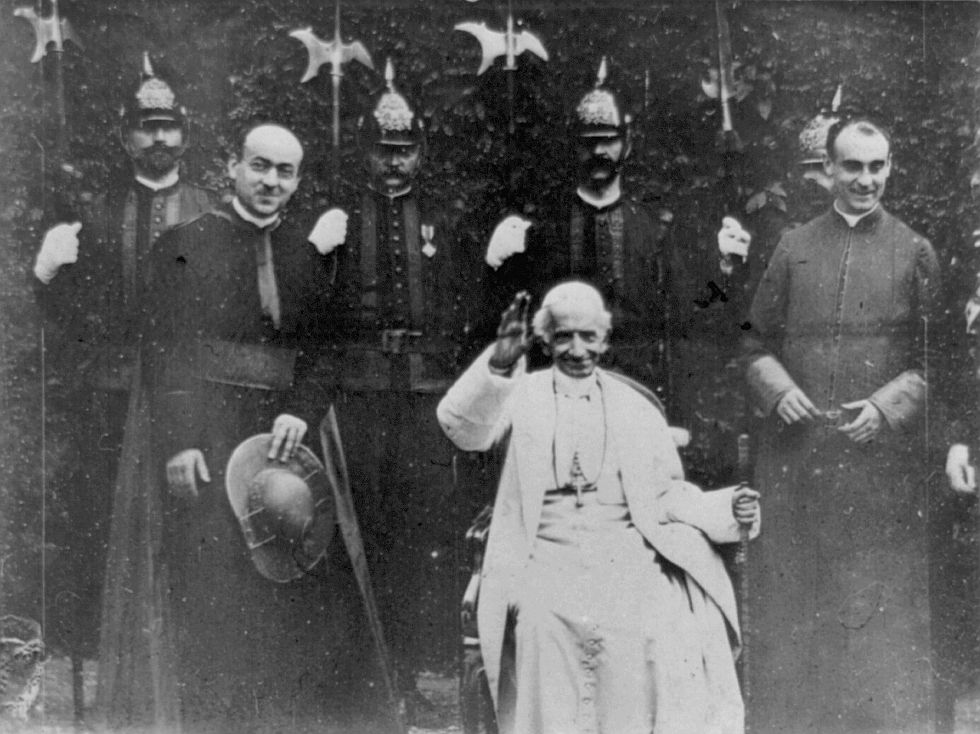 “But the supreme teacher in the Church is the Roman Pontiff. Union of minds, therefore, requires, together with a perfect accord in the one faith, complete submission and obedience of will to the Church and to the Roman Pontiff, as to God Himself.  This obedience should, however, be perfect…(and) must consequently be accepted without wavering….

“Wherefore it belongs to the Pope to judge authoritatively what things the sacred oracles contain, as well as what doctrines are in harmony, and what in disagreement, with them; and also, for the same reason, to show forth what things are to be accepted as right, and what to be rejected as worthless; what it is necessary to do and what to avoid doing, in order to attain eternal salvation.”

“The pope is the supreme judge of the law of the land….He is the vicegerent of Christ, and is not only a priest forever, but also King of kings and Lord of lords.”

that God in his appointed time will bring forth the kingdom of the Lord Christ unto more glory and power than in former days, I presume you are persuaded. Whatever will be more, these six things are clearly promised: —

4thly. The full casting out and rejecting of all will-worship, and their attendant abominations, Revelation 11:2.

5thly. Professed subjection of the nations throughout the whole world unto the Lord Christ, Daniel 2:44, 7:26,27; Isaiah 60:6-9; — the kingdoms become the kingdoms of our Lord and his Christ, [Revelation 11:15,] amongst whom his appearance shall be so glorious, that David himself shall be said to reign.

6thly. A most glorious and dreadful breaking of all that rise in opposition unto him, Isaiah 60:12, — never such desolations, Revelation 16:1719.

First, the mass is a most subtle and pernicious enemy against Christ, and that double, namely, against his priesthood and against his sacrifice. His priesthood is an everlasting priesthood, and such an one as cannot go to another. But the mass utterly puts him out of place, as though he were dead for ever; and so God is forsworn which said Christ should be ‘a priest for ever,’ and Paul lieth which affirmeth Christ to live, and to be ‘on the right hand’ of the Father for us, that by him ‘we may come to the throne of grace to find mercy to help us in our need:’ for, if these be true as they be most true, the mass priests are to be put down: for, if they be ‘of the order of Aaron,’ then resume they that which Christ hath abolished; if they be ‘of the order of Melchisedec,’ then be they Christ’s. Other orders of priests I read none, save that which all Christians be, to offer up themselves to God and other spiritual sacrifices by Christ, and the order of ‘priests of Baal,’ whose successors indeed the massers be (from The Writings of John Bradford, volume 2, pp. 312-313). ​

Drugs and Sodomy in the Vatican

According to an article which first appeared on 28 June in the Italian newspaper, Il Fatto Quotidiano, Vatican police, alerted to strange shenanigans going on in the flat of a monsignor, a man who was the secretary of a senior Roman Catholic cardinal, raided the flat and broke up a drug-fuelled homosexual party.[1]  The flat, which is in the Vatican itself, is not far from the Santa Marta residence of the pope of Rome, Francis I.  It is in the Palazzo del Sant’Uffizio, which belongs to the Vatican’s “Congregation for the Doctrine of the Faith” – which used to be known as the Inquisition.  Be it noted, the Congregation for the Doctrine of the Faith is the very institution in charge of supposedly dealing with priestly sex abuse cases!

Neighbours living in the building had complained of the “constant coming and going” of young men, and of noisy parties being held in the flat.[2]

The Italian article said that the secretary was also entrusted with a luxury car with Vatican number plates, which enabled him to transport the drugs into the Vatican without being troubled by Vatican or Italian police.

The Vatican reacted – apparently by hustling the offender off into a “retreat”!  The monsignor was taken for detox at a medical facility, and was later said to be “in retreat” in a monastery somewhere in Italy.[3]  This is usual Vatican practice when one of their own is bust in some scandal of a sexual nature – he is hustled off to some secret location.

Then on 30 June, in a piece published on a French website, the monsignor-secretary was named: he was Luigi Capozzi.  And so it came out that Capozzi’s boss is the Romish cardinal, Francesco Coccopalmerio.  He is head of the Vatican’s Pontifical Council for Legislative Texts, which makes him “like the Church’s Chief Justice, the chief interpreter of the Church’s laws.”[4]  A very influential man in the Vatican indeed.  And surely he was not unaware of his secretary’s behaviour.  As one high prelate commented: “Is it possible that he [Coccopalmerio) never noticed anything?  Yet he often said that they [Coccopalmerio and Capozzi] worked together until late.”[5]  Certainly, considering how the monsignor was enjoying such benefits “above his pay grade” so to speak, it indicates that he was being protected by some very powerful authority figures within the Vatican itself.

But Is the Story True?

In the original article in the Italian newspaper, Il Fatto Quotidiano, “no named source whatsoever” was provided.[6]  No named sources to confirm the story; an unnamed secretary, who allegedly worked for an unnamed cardinal; no date given for the party; nothing about who actually sent the Vatican police to investigate and break up the party; no photographs of anything; no inventory of the drugs found at the party.  To many, all these things indicate that the entire story was a fabrication.  And yet it spread around the world like wildfire, being picked up by other media outlets.

However, there was a party, and it was broken up by the Vatican police.  According to Robert Moynihan, author of The Moynihan Letters, highly respected in Roman Catholic circles as he is the editor of the influential magazine, Inside the Vatican: “I have now managed to confirm that some sort of a party did in fact take place, and that the Vatican police did come to investigate the party, entering a Vatican apartment where the party was being held, and breaking up the party.  So, there seems a legitimate basis for an attempt to trace out at least part of the genesis and development of this story, though there still seems no reliable basis for any detailed presentation of the facts.”[7]

We beg to differ with his last statement.  Consider the facts:

“Remember and understand well that where Peter is, there is the Church; that those who refuse to associate in communion with the Chair of Peter belong to Antichrist, not to Christ. He who would separate himself from the Roman Pontiff has no further bond with Christ.”

(Source: Pope Leo XIII, Satis Cognitum, quoted in “Acts of Leo XIII: Supreme Pontiff”, Rome: Vatican Press, 1896, (quoted in Apostolic Digest, by Michael Malone, Book 4: “The Book of Christians”, Chapter 4: “There is No Allegiance to Christ Without Submission to the Pope”))

“Receive the tiara adorned with three crowns and know that thou art Father of princes and kings, Ruler of the world, Vicar of our Savior Jesus Christ.”