Former priest William Hogan on the RCC’s approach to Protestant people and nations in the 1800s: 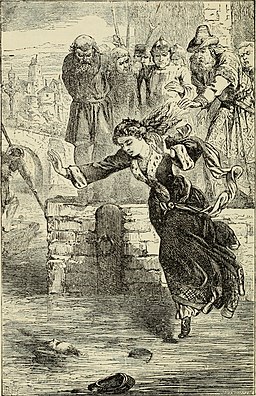 A true Papist will stop at nothing to advance the power of the Pope, or the interest of the holy church. Heretics, by which the reader will understand all who do not belong to the Roman Catholic church, are to be destroyed, cost what it will. Death, and the destruction of heretics, is the watchword of Popery. Down with Protestant governments, kings, presidents, governors, judges, and all other civil and religious authorities, is the war-cry in Popish countries. They desire neither to live nor die with us. They refuse to be laid down in the same common earth with us. Need this be proved to Americans? One would suppose not. Our intercourse with Roman Catholic countries is such, at present, that there can be no longer any doubt of this fact.

~William Hogan, Popery! As it Was and as it Is, Popish Bishops and Priests Absolve Allegiance to Protestant Governments

Text Appearing Before Image:
Lord. Having thus put to death the father and one son, thebigoted monsters next determined to sacrifice the motherand the other son ; but before doing this, all arts were em-ployed to induce them to quit the faith, and embrace theerrors of popery. The mother, at length, induced by theirthreats and promises, abandoned the truth ; and was thenexhorted by the monks to convert her son, which she prom-ised to do; but upon his being admitted to her for thatpurpose, he remonstrated so earnestly with her on the sin-fulness and folly of her conduct, that she was convinced,and turned again to the Lord, beseeching him, with tears,to grant her strength to maintain the right. And she con-tinued ever after firm in the faith ; which so incensed thebigoted monks, that they adjudged her, with her son, tothe flames, as obstinate lieretics. Soon after, they were bound and brought to the place oftheir martyrdom; his mother having ascended the scaffold,cried to Martin, Come up, come up, my son. And as he [rest missing in original]

Text Appearing After Image:
Younc: Wife Perishing- with her Husband. Page 491. Thus we have taught the two parties in the State to countthe Catholics as something. Cardinal Wiseman. If the United States ever lose their liberty, it will bethrough the Romish Priesthood. George Washington. The Catholics hold the balance of power and they /illnot permit the politicians to forget that fact. (489) Catholic Review. FARTHER PERSECUTIONS. # 489 ?as speaking to the people, she said, Speak out Martin,hat it may appear to all that we do not die heretics.vlartin would have made a confession of his faith, but waslot suffered. His mother being bound to the stake, spaken the hearing of the spectators, We are Christians, andhat which we now suffer is not for murder nor theft, but)ecause we will believe no more than that which the word)f God teacheth us, both rejoicing that they were countedvorthy to suffer for the same. The fire being kindled, theehemency thereof did nothing to abate the fervency ofheir zeal, but they continued [rest missing in original]