REV. EDWARD HOARE, M.A. on how Rome satisfies the human need to worship: 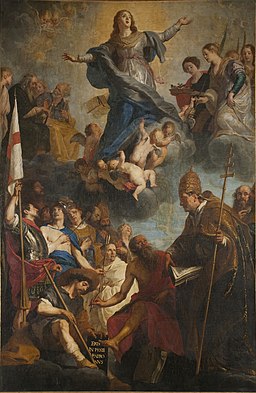 It is plain to any man that without worship there can be no true religion, and the Gospel is a grand scheme whereby God enables men to pray.  Christ came that we might have boldness and access with confidence by the faith of him.  His blood removes every barrier, and his Spirit gives the needful power.  But unless that Gospel be embraced with an appropriating faith, true prayer remains an impossibility; men may repeat their prayers, but, like St. Paul, they will never really pray.  Hence, if a man remain in an unconverted state, he must do one of two things; he must either give up prayer altogether, which cannot satisfy an anxious mind; or he must have some modification of true worship.  If he cannot rise in heart to heaven, he must have a shadow of the throne provided for him on earth.  Now mark the effect of this necessity.

The first great difficulty in the way of earnest prayer is realization.  The natural man cannot realize unseen spirits.  There is a height and glory in them beyond his reach.  But yet there is no peace unless he does realize.  So what must he do?  Me must invent some representation, whereby to lead on his mind; some image, figure, or effigy, which may stand before him, in order to bring the object of his worship to his view, and which may stand as a hallowed emblem, through which he pays God his honour; he invents for himself just such a system as is described in the decree of the Council of Trent, when it says, Sess. xxv., “The honour which is given to the images is given to the prototypes which they represent, so that through the images which we kiss, and before which we uncover the head and make prostration, we adore Christ, and venerate those saints of whom they are the likeness.”  Through the image they adore the Saviour, and the image is employed as an accommodated help to assist the process of realization in the worship of an unseen God.

If there were any doubt that this is the true history of image-worship, it would be removed by the fact that the sin has appeared under the same form, under all circumstances, and in all ages.  Aaron made the calf as a representation of God, and said, “These be thy Gods, O Israel, which brought thee out of the land of Egypt;” and the Hindoo of the present day regards his idol as a representative of his deity.  A Jesuit priest was in conversation the other day with a learned Hindoo in the neighbourhood of Madras, and urged him to embrace what he termed the Catholic faith.  “What is the good,” said the heathen, “of my exchanging one system of idolatry for another?”  “Idolatry!” said the priest, “you do not mean to say that ours is idolatry.  We do not worship our images; we merely set them before us, and adore our Saviour and the saints in them.”  “And do you suppose,” replied the heathen, “that we actually worship the images?  No; we merely set them before us as a representation of our gods.  No, Sir; a Christian I may become, but I shall never be a Roman Catholic.”  There was not a shade of difference between the two systems, both having sprung from the natural tendencies of the human heart.

This identity was on one occasion curiously illustrated by the Church of Rome itself, for when they obtained possession of a magnificent statue of Jupiter Tonans, they removed the thunderbolt out of his hand, and gave him two large keys in its place.  By this slight alteration, they changed Jupiter into Peter, and transferred him from a Pagan temple to a Christian Church.  Could anything shew more clearly that Paganism and Romanism were nothing more than different accommodations to the idolatrous tendencies of the human heart?  There was no opposition in principle, and the only difference was between the thunderbolt and the keys.

What a refreshing contrast do we find in the records of the Tinnevelly Mission, where the heathen idols have been used for pavement at the Church doors, so that none can enter God’s house for worship without first trampling the former idol under foot!

From the same nature has sprung the system of saint worship.  There is always a tendency to deify the great, and just in proportion as time advances does this tendency increase.  The man’s human frailty is daily witnessed by his own contemporaries, and the humanity of his nature kept in view by visible facts; but when the corrective evidence of real life loses its power through the lapse of time, the human failures are forgotten, while the great acts are exaggerated, till something supernatural is attached to the memory, and the earthly benefactor is adored as a god.  This is the history of all the tutelary deities of Pagan lands.  Romulus, e.g., was no sooner dead than deified; the most popular deity of China, Laoutze, was one of the early emperors, and there is scarcely a nation in the world that has not elevated its benefactors into gods.

Here, then, is the natural tendency of the natural heart—a tendency in direct opposition to Christianity.  But, though thus opposed to the Gospel, it is not necessarily eradicated from the heart of every professing Christian; and, hence, it has produced within the Church a new mode of Christianized hero-worship, in which the martyrs have taken the hero’s honours, and the Virgin is crowned with the crown of Cybele.  There was nothing wonderful in this.  They witnessed the martyrs’ faith, and met for sacramental communion around the martyrs’ tombs; they knew their souls yet lived, and they knew not but what they might be even present.  What, then, could be more natural than that the waiting heart should begin to adore them?  It was not addressing a Pagan god, but a Christian saint, and the very prayer was an acknowledgment of all the great principles of Christianity.  But when once that prayer was uttered, the Rubicon was crossed, and the principle of saint-worship established in the Church.  Hence you find the guardian saints and angels of the Church of Rome filling exactly the same office as the tutelary deities of the Heathen.  And, as we have just remarked the identity of Pagan and Roman image-worship as illustrated by the alteration of the image, so there is another curious fact which exhibits the similar correspondence between the hero-worship of the ancients and the saint-worship of modern Rome.  When the Emperor Phocas issued his celebrated edict in recognition of the supremacy of the See of Rome, he made a present to the Pope of the ancient temple named Pantheon.  Now this temple was originally dedicated to Cybele, and all the Pagan gods, and when it fell into the possession of the Pope, he made as slight a change as possible, for he just turned it over to the Virgin Mary and all the saints.  The principle was left untouched, though the objects of the idolatry were changed.

But there is a yet further principle involved in this saint and virgin worship; for the human heart requires tenderness and sympathy, so that we can never breathe out our secret burden to one who has no fellow-feeling with our trouble.  We want the sympathy of a common nature, if not the tenderness of a woman’s heart.  Hence in Heathen systems you constantly find a Heathen goddess to whom pertains especially the office of patronage and mercy.  Even Simon Magus had his Helena in his system of Gnosticism; and the poor Buddhist, while he looks with awe to his three Buddhas, has his Kwan-yin, or Goddess of Mercy, to whom he may appeal in trouble.  Yes! the human heart needs tenderness, and if there is any one aspect in the Gospel more glorious than another, it is the rich provision made for this very want.  There never was a scheme so wonderful, or a Saviour so perfect as that presented in the Gospel.  Glorious in his divinity, he sways heaven’s mighty sceptre, while, perfect in his humanity, he can be tenderly touched with the faintest cry of human grief.  He governs angels, and weeps with men.  But the natural man is a stranger to this sympathy; yet he longs for it and feels the need of it.  He is exposed to the shocks and buffetings of this rough world, and his bleeding heart needs a friend who himself has bled.  If he has not Christ, therefore, he naturally craves a substitute; something which may give him the sense of sympathy amongst the unseen powers.  And this desire has gradually run into saint and virgin worship.  It has taken hold of the hero-worship of the Heathen, and given it a Christian character by transferring it to the Virgin and the saints.  It does not do away with Christ, but provides a system of intermediate mediation which commends itself to the aching heart by the assurance of a woman’s love and a fellow-sufferer’s compassion.  Hence, if any particular saint was subject during life to any especial trial, he is supposed to take a peculiar interest in those who labour under similar affliction.  Nor can you read much of the adoration paid by Rome to the Virgin without perceiving that she is the Kwan-yin, the Goddess of Mercy, in the Romish system.  There is a halo of awe thrown around the brow of the Redeemer, while the Virgin is described in the attitude of tenderness, “the comforter of the afflicted,” “the refuge of the sinner,” and the ready listener to the sufferer’s cry.  We will adduce one instance in illustration, as given by Mr. Tyler in his valuable little work “What is Romanism?”  The worship of the Virgin is especially celebrated in Romish countries during the month of May, and there is a collection of religious poems used in the churches of Paris on these occasions.  One of these is as follows:—

Here God is presented in the attitude of terror, while the female advocate is the sole depository of grace; and the whole springs from the natural heart, which, under the sense of sin, feels a dread of God; and longing for sympathy, appeals to a woman’s love.