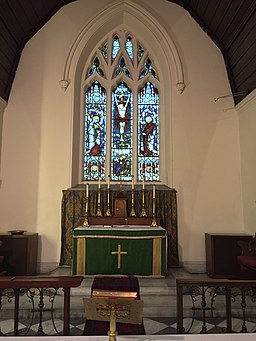 THE RITUAL COMMISSION has issued its report, and with it a vast appendix. From amid dustheaps almost as huge as those which Dickens has immortalized, we have, by dint of fiddling and using the sieve, extracted a few pieces of gold and silver, which we hope will pass for good metal and be as useful now as they were in the days long past.

Many of the reformers were evidently as disgusted with the ceremonials tolerated in the Anglican church as ever we can be. Royal rather than spiritual authority, was the reason for sparing those Popish mummeries which have survived the reformers’ pruning knife. Bishop Hooper, if we mistake not, was always a greater admirer of vestments than plain Hugh Latimer, but the very meager lengths to which he would have gone are illustrated by the following extracts, which it must have been to the edification of the lords and gentlemen of the Commission to have heard read. They are from his work on the prophet Jonah.

In Hooper’s fourth sermon he remarks:—

“This prayer of Jonas is so acceptable, it might be thought of some men, that the place where Jonas prayed in, should have bettered it, as the foolish opinion of the world is at this time, that judgeth the prayer said at the high altar to be better than that which is said in the quire, that in the quire better than that said in the body of the church. . . . This I would wish that the magistrates should put both the preacher, minister and the people, in one place, and shut up the partition called the chancel, that separated the congregation of Christ one from the other!”

Good advice indeed, and worthy to be carried out instanter, even if half the church edifices should need leveling to effect it. What are architecture and art compared with the vantage-ground afforded to error! If the nests were pulled down, or thoroughly altered, the birds might be led to fly to their proper quarters in the dark woods of Popery, and Protestantism would be well rid of them.

In his sixth sermon, in allusion to Baptism, he observes:—

“The matter and element of this sacrament is pure water; whatsoever is added, oil, salt, cross, lights, and such other, be inventions of men, and better it were they were abolished than kept in the church. . . . I pray the King’s Majesty and his most honorable Council to prepare a ship, as soon as may be, to send them home again to their Mother Church.”

In the same sermon Hooper says in reference to the Holy Eucharist:—

“If we have bread, wine, and a fair table cloth, let him [‘the minister’] not be solicitous nor careful for the rest, seeing they be no things brought in by Christ, but by Popes; unto whom, if the King’s Majesty and the honorable Council have good consciences, they must be restored again; and great shame it is for a noble king, emperor, or magistrate, contrary unto God’s word, to detain and keep from the devil and his minister any of their goods and treasure, as the candles, vestments, crosses, altars, for if they be kept in the church as things indifferent, at length they will be maintained as things necessary.”

How truly did Hooper foresee! for at this hour, the tolerated millinery is cried up as essential to acceptable worship. Blessed would be the vessel which should transport all such trumpery to the Holy Fathers’ own haunts, where Garibaldi and his waiting band would be glad to make a bonfire of them like that at Ephesus.

About that same time one of the reformed, who had returned from exile, wrote to his friend Peter Martyr:—

“What can I hope when three of our lately appointed bishops are to officiate at the Table of the Lord, one as priest, another as deacon, and a third as sub-deacon, before the image of the crucifix, or at least not far from it, with candles, and habited in the golden vestments of the Papacy, and are thus to celebrate the Lord’s Supper without sermon!”

Archbishop Leighton, whose piety makes every word weighty, said in one of his sermons:—

“What is the shining of the true church? Doth not a church then shine when church service is raised from a decent and primitive simplicity, and decorated with pompous ceremonies, with rich furniture and gaudy vestments? Is not the church then beautiful? Yes, indeed; but all the question is, whether this be the proper genuine beauty, or no? Whether this be not strange fire, as the fire that Aaron’s sons used, which became vain, and was taken as strange fire? Methinks it cannot be better decided than to refer it to St. John in his Book of Revelation. We find there the description of two several women; the one riding in state, arrayed in purple, decked with gold and precious stones and pearls (Revelation 17:3); the other in rich attire too, but of another kind (chapter 12), clothed with the sun, and a crown of twelve stars on her head. The other’s decorement was all earthly; this woman’s is all celestial. What need she borrow light and beauty from precious stones, that is clothed with the sun and crowned with stars? She wears no sublunary ornaments, but, which is more noble, she treads upon them. The moon is under her feet. Now, if you know (as you do all, without doubt), which of these two is the spouse of Christ, you can easily resolve the question. The truth is, those things seem to deck religion, but they undo it. Observe where they are most used, and we shall find little or no substance of devotion under them; as we see in the apostate church of Rome. This painting is dishonorable for Christ’s spouse, and besides, it spoils her natural complexion. The superstitious use of torches and lights in the church by day, is a kind of shining, but surely not commanded here. No, it is an affront done both to the sun in heaven and to the Sun of Righteousness in the church.”

The notorious Puritan, Henry Burton (as the appendix calls him), most wisely, with almost prophetic foresight, wrote:—

“But besides all this, these men have one special sanctuary to fly into, and that is their cathedral churches. . . . These be their old high places not removed. . . . These be those nests and nurseries of superstition and idolatry wherein the old beldame of Rome had muzzled up her brood of popelings, and so preserved her usum Sarum in life to this present day. And now these are become impregnable bulwarks to patronize our re-builders of Babel in all their innovations. ‘Innovations,’ say they. ‘We bring in no innovations, no new rites, but what hath been in use ever since the Reformation, and that in the most eminent places, even the mother churches of the land. Now, all that we go about is to reduce inferior churches to an unity and conformity to their mother churches.’ . . . Thus do our master builders plead.”

It is no doubt true that the gaudy performances of the cathedrals have kept alive the Popish spirit in the church, and there will be no end to Ritualism while cathedral services are kept up in their present semi-popish fashion. Of course, what is good in a big church is good in a little one, and the cathedrals are little better than drill-grounds for Ritualistic performers.

The Puritan Smart, complains that:—

“Most of the bishops of our time . . . busy themselves in nothing more than in setting up altars with all manner of superstitious furniture, crosses, crucifixes, candles, candlesticks, etc. Our bishops think it their bounden duty, as soon as ever themselves are consecrated, to fall to the consecration of churches, churchyards, altars, organs, images, crucifixes, tapers, etc. Our bishops think they seek the Kingdom of God, and the righteousness thereof, when they persuade his Majesty (Charles I) to restore altars, organs, images, and all manner of Massing trinkets, more than ever they were in the time of Popery. Our bishops teach and maintain stoutly that altars, images, crosses, crucifixes, candlesticks, etc., are not repugnant to our religion, nor contrary to the authority of Scripture; [and] . . . would have them brought in again according to the pattern, and after the example of the King’s Royal Chapel, and . . . labor with all their might and main that the offense may be spread through all the king’s dominions, both cathedral and parish churches.”

“He,” the ‘ceremony-monger,’ “does not say the mass indeed in Latin; but his hood, his cope, his surplice, his rochet, his altar railed in, his candles, and cushion and book thereon, his bowing to it, his bowing, or rather nodding, at the name of Jesus, his organs, his violins, his singing men, his singing boys, with their alternate jabbering and mouthings (as unintelligible as Latin service), are so very like popery, that I profess, when I came from beyond sea, about the year 1660, to Paul’s and Whitehall, I almost thought, at first blush, that I was still in Spain and Portugal; only the candles on our altars, most nonsensically, stand unlighted, to signify, what? The darkness of our noddles, or to tempt the chandlers to turn downright papists, as the more suitable religion for their trade? for ours mocks them with hopes only. He gapes and stares to see the lucky minute when the candles should be lighted; but he is cheated, for they do not burn out in an age.”

O for an hour of John Knox or Martin Luther! Our comfort is that God reigns yet, and Antichrist must come down, defend her who may! He who removed the frogs from Egypt with a word, can yet send us a Moses whose uplifted rod shall consign to the Tiber a pest more dire than that which disappeared beneath the floods of the Nile.