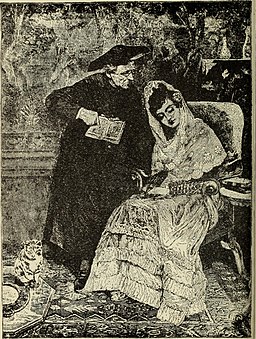 HARDLY can we remember so singular an incident as that which Dr. Wright records in the interesting pamphlet which now lies before us. If we had hitherto believed in the infallibility of the Pope of Rome, the fact here recorded would have delivered us from the delusion, and we trust the making of it known may have a like effect upon those who are now the victims of that fiction.

It seems that a certain M. Henri Lasserre found great benefit for his sore eyes from his faith in the water of the Lourdes Grotto, and invocations of the Blessed Virgin. Abundant facts prove that faith in anything has a curative effect. Whether it is a doll dressed in satin, as at Larghetto, or a doctor with a wide reputation, or a quack medicine, or an old woman, or a broom-stick; if you have confidence that you will be cured, it goes a long way towards curing you. That, however, is not the point. M. Lasserre was grateful for his cure, and, moved by that gratitude, wrote a book, entitled, “Notre Dame de Lourdes.” It was the making of the place. His pen caused Our Lady of Lourdes to be much sought after; for his writing was charmingly attractive, and secured a host of readers.

On a happy day, M. Lasserre discovered the Four Gospels, and was greatly impressed by them. He thought that the fourfold story of Jesus was the very book that France wanted; and he thought most wisely. He devoutly set to work to translate the original into the French of the day; making, not exactly a literal translation, but one which would command a reading from the ordinary Frenchman. Not in chapters and verses, but like an ordinary book, the gospel narrative flowed on in a charming manner. The version was as faithful as Henri Lasserre could make it; it would not quite satisfy an evangelical believer, but it was a wonderful performance for a Roman Catholic. For a preface, it bore in its forefront a lamentation over the neglect of the gospels by Catholics. He exclaims, “The gospel—the most illustrious book in the world—is become an unknown book.” Strange that such a book, with such a preface, should be dedicated to “Notre Dame de Lourdes.” But there was something stranger. The book appeared with the imprimatur of the Archbishop of Paris, and the approval and benediction of the Pope!! Note this—

“The Holy Father has received, in regular course, the French translation of the Holy Gospels which you have undertaken and accomplished, to the delight and with the approval of the Archepiscopal authority. His Holiness commissions me to express to you his approval of the object with which you have been inspired in the execution and publication of that work, so full of interest,” &c.

Miracles will never cease; the Pope had sanctioned a preface extolling the reading of the Scriptures, and had also given his countenance to a popular translation of a portion of the New Testament.

The Gospels, thus recommended, obtained a ready sale; edition followed edition, till the twenty-fifth appeared. Probably one hundred thousand copies were sold, at four francs each. Not as cheap tracts, but as valuable books which are sure to be preserved, had the Gospels entered many French families, under the sanction of the Pope.

Suddenly “the Sacred Congregation” discovered that an error had been committed, and a decree was issued from the Apostolic Palace of the Vatican, with the approval of “OUR MOST HOLY LORD, POPE LEO XIII.,” condemning the translation of Henri Lasserre, to be placed upon the index of forbidden books. An infallible benediction was removed to make room for an equally infallible malediction in the space of twelve months and fifteen days. The book has been withdrawn from circulation; but no hand can gather up all the copies, or destroy the good which must have come of their perusal. As for M. Henri Lasserre, he deserves our sympathy, and he should be the object of the prayers of all who rejoice in gospel light, that on him the fulness of truth and grace may dawn.

This very wonderful story is set forth at length, with all the documents, by our friend, Dr. William Wright, of the Bible society; and those who invest a shilling in the purchase of his pamphlet, which is published by Nisbet, will do well to keep the document. Hereafter, it will be produced full many a time as the clearest possible demonstration that the Pope is not infallible—proof which must tell upon even a Catholic mind. We hear that the pamphlet is to be sown broadcast over Italy, and it will be good seed.

The stopping of the sale of the Gospels may turn out to be for the furtherance of the truth. Let our readers think of it and rejoice—it is true that a Milan newspaper is daily issuing the Gospels in numbers. It will be a charming novel for the Italians. Hundreds of thousands will read the story of our Lord’s life and death, and the Lord will make it to them as a voice from heaven. Courage, brethren! God is confounding his enemies, winning wanderers, and visiting his people!

Text Appearing After Image:
The Forbidden Book. To give the Bible to the lay people is to throw pearls be-fore swine. Cardinal Hosious, Cursed be those cunning and nefarious societies whichcall themselves Bible Societies, and which give the Bible to the inexperienced youth. Pius IX. Were God to order me through the voices of my superiors to put to death, father, mother, children, brothers and sisters,I would do it with an eye as tearless, and a heart as calm, as if I were seated at the banquet of the Paschal Lamb.—Affirmation of a Jesuit. (33) CHAPTER VI. ENOCH MATHER MARVIN, LATE BISHOP OF THE METHODIST EPISCOPAL CHURCH SOUTH. PRACTICAL RESULTS OF I\IE DOCTRINE OF TRANSUBSTANTIATION. And their word will eat as doth a canker.—(2 Tim. ii. 17. As most of you are already aware, I have, this evening,to deal with the practical results of the doctrine of Tran-substantiation. In doing so, I will, in the beginning, make this disclaimer: I do not charge that every individual who holds this doctrine realizes, in his own cha… [rest missing from source file]