Christopher Wordsworth, D.D. on the pre-Protestant identification of the woman on the beast as papal Rome rather than pagan Rome: 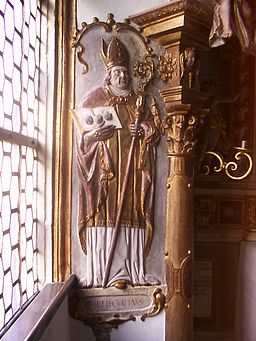 “The truth also is, that Bossuet misrepresents the interpretation which identifies the Church of Rome with Babylon. He calls it “a Protestant interpretation”; by which he means that it is a modern interpretation, contemporary with, or subsequent to, the Reformation in the sixteenth century.

But this is an oversight. For no sooner did the Church of Rome begin to put forth her present claims, and enforce her modern creed, than it was proclaimed by many witnesses, that by so doing she was identifying herself with the Babylon of the Apocalypse.

Dating from Pope Gregory the First, who made a prophetic protest against the title of Universal Bishop at the close of the sixth century, we can trace a succession of such witnesses to this day. In that series we may enumerate the celebrated Peter of Blois, the Waldenses, and Joachim of Calabria, Ubertinus de Casali, Peter Olivi, Marsilius of Padua, and the illustrious names of Dante and Petrarch.

In the seventh and following centuries, the Church of Rome was united with the City of Rome, by the junction of the temporal and spiritual Powers in the Person of the Roman Pontiff; and when the Church of Rome began to put forth her new dogmas, and to enforce them as necessary to salvation, then it was publicly affirmed by many, (although she burnt some who affirmed it), that she was fulfilling the Apocalyptic prophecies concerning Babylon. And though the destruction of heathen Rome by the Goths in the fifth century was a most striking event, yet not a single witness of any antiquity can be cited in favor of the Exposition of Bossuet and his co-religionists, who see a fulfillment of the predictions of the Apocalypse, concerning the destruction of Babylon, in the fall of heathen Rome by the sword of Alaric.

Indeed, that exposition is a modern one; it is an afterthought; and has been devised by Bossuet and others to meet the other, which they call the Protestant, interpretation. The identification of the Apocalyptic Babylon with ancient Heathen Rome, as its adequate antitype, is an invention of modern Papal Rome.”

~“Is not the Church of Rome the Babylon of the Book of Revelation?” An Essay by Christopher Wordsworth, D.D., Sometime Bishop of Lincoln at http://www.ianpaisley.org/article.asp?ArtKey=union_2a

One thought on “The Interpretation Was Prior To The Reformation”