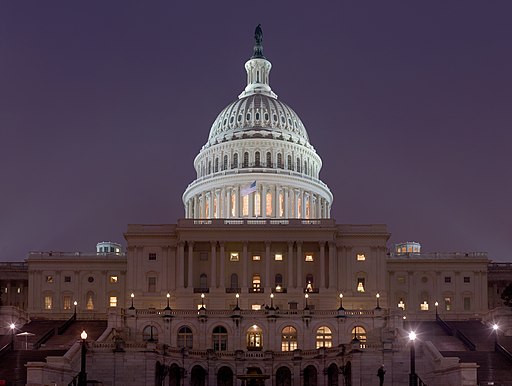 F. Tupper Saussy on the building of the U.S. Capitol:

This South East corner stone, of the Capitol of the United States of America in the city of Washington, was laid on the 18th day of September, in the thirteenth year of American Independence, in the first year of the second term of the Presidency of George Washington, whose virtues in the civil administration of his country have been as conspicuous and beneficial, as his military valor and prudence have been useful in establishing her liberties, and in the year of Masonry, 5793, by the President of the United States, in concert with the Grand Lodge of Maryland, several lodges under its jurisdiction, and Lodge No. 22 from Alexandria, Virginia.

President Washington then descended into a builder’s trench prepared for the Capitol’s foundation, laid the plaque on the ground, and covered it over with the cornerstone…

Then, just as the priests of Jupiter might have blessed their capitolia two millennia ago three Worshipful Masters consecrated the stone with corn, wine, and oil…  Afterward, said the Gazette,

the congregation joined in reverential prayer, which was succeeded by Masonic chanting honors, and a 15-volley from the artillery…

Reading of the barbeque, I was reminded of the passage in the Aeneid where Julius Ascanius promised a sacrifice to Jupiter for favoring his rebellious undertaking:  “I shall bring to thy temple gifts in my own hands, and place a white bullock at thy altar.”  Could it be that the silver plaque, the corn, the wine, the oil, the chanting, the roasted ox, and the reverential prayer were the fulfillment of that promise – a burnt sacrifice to Jupiter, on the altar of his capitolium, upon land called Rome, land formally consecrated by Pontifex Maximus to the protection of the goddess Venus?”

Note: Chapter 20 describes the connection between the goddess Venus and the Virgin Mary

One thought on “Masonic at its Foundation”