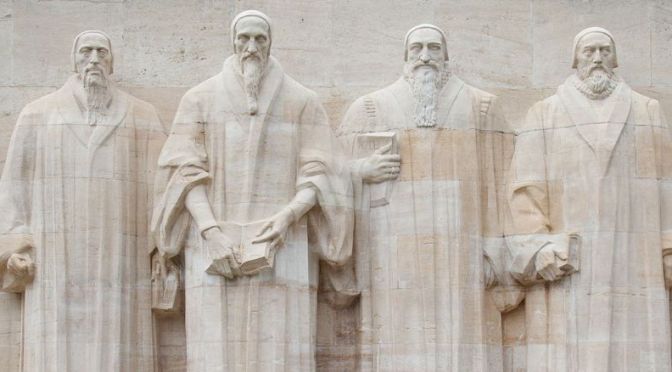 William Cunningham via The Protestant Pulpit:

The fundamental position maintained by the Reformers was this, that the views which they had been led to form, as to what should be the doctrine, worship, and government of the Church of Christ, were right, and that the views of the Church of Rome upon these, points, as opposed to theirs, were wrong. This was the grand position they occupied, and they based their whole procedure upon the ground of the paramount claims of divine truth, its right, as coming from God and being invested with His authority, to be listened to, to be obeyed, and to be propagated: When the Papists opposed them in the maintenance of this position, and appealed on their own behalf to tradition, to ecclesiastical authority, to the decisions of popes and councils, the Reformers in reply pushed all this aside, by asserting the supremacy of the written word as the only standard of faith and practice, by denying the legitimacy of submitting to mere human authority in religious matters, and by maintaining that men are entitled and bound to judge for themselves, upon their own responsibility, as to what God in His word has required them to believe and to do. They asserted these positions more or less fully as circumstances required, but still they regarded them as in some sense subsidiary and subordinate. The primary question with them always was, What is the truth as to the way in which God ought to be worshipped, in which a sinner is saved, and in which the ordinances and arrangements of the Church of Christ ought to be regulated? They were bent upon answering, and answering aright, this important question, and they brushed aside everything that stood in their way and obstructed their progress.

There can be no doubt that the only satisfactory explanation of the conduct of the Reformers is, that they regarded themselves as fighting for the cause of God.