The Sound of an Alarm has been highlighting some concerns with the new Reformation Heritage KJV Study Bible.

In particular, it appears that some of the Bible’s notes appear to promote doctrinal error as well as Catholic doctrine.

Some of the issues raised with the notes and the Bible are as follows:

Please note that Dr. Beeke has addressed some of these criticisms as per The Sound of an Alarm:

To read more about what The Sound of an Alarm has posted on this topic, please visit this link:

Note: Due to circumstances beyond my control, posting on this blog will be sporadic for the next little while.

I have been unable to regularly update and maintain this blog for the past few months.  However, during that time much has continued to happen around the world that relates to the content of this blog.

Here are some of the Rome and eschatology-related things that have occurred over the past few months:

Vatican finds hundreds of millions of euros ‘tucked away’: cardinal

Rome’s mafia scandal could lead to breakdown of law and order, says Vatican

Ecumenism and One World Everything…Coming Together and Falling Apart

China Has Announced Plans For A ‘World Currency’

How the European dream is dying, state by state

Look What Message The Vatican Papal Plane Is Proclaiming

Pietists And Romanists Together

‘Peace is always possible’: Pope Francis begs the world for an end to all wars in his New Year wish:

Pope Francis names 15 new cardinals from every corner of the world – including Tonga, Cape Verde and even Burma

Vatican use of Population control word “sustainable” at UN worrisome

We remember! Greg Laurie’s joining of Hands with the Great Whore of Babylon-The Catholic Church. The “We Accuse” series

When Evangelicals Got Standing Ovations at the Vatican
.
“What’s Really Going On?”
.

The weeping Jesus of Greece: Priests claim icon of Christ on the cross has been crying since general election victory for Syriza

Vatican mummies are FAKES: Bones inside two of the collection’s ‘ancient’ Egyptian caskets date back to the Middle Ages

American Politics and Rome Behind The Scenes

Is the Pope the Super-boss of all government agencies as well as the Vatican?

EXCLUSIVE – Children CAGED to keep the streets clean for the Pope: Police round up orphans and chain them in filth during pontiff’s visit to Philippines

Is the Present Peaceful Face of Romanism Its Official Stand?

Pope condemns ‘deviant forms of religion’ in the wake of French massacre, accusing them of causing ‘the breakdown of society and spawning violence and death’

“Pope Francis”: Business as Usual in the Sex Abuse Scandal

Pope Francis: ‘You Cannot Be a Christian Outside the Church’

Pope Francis S.J. Feels “an ‘event’ … wipes him out, not a natural end”

Pope Francis says he believes he will only remain as pontiff for another ‘two or three years’, sparking fears about his health

This is the end? Pope gives up cryptic hint 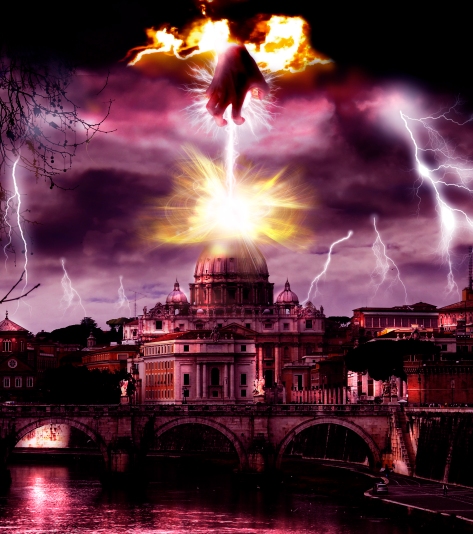 Note: Due to circumstances beyond my control, posting on this blog will be sporadic for the next little while.

Here is a fascinating article by Shaun Willcock evaluating current threats against Rome from a Historicist perspective:

“Therefore shall her plagues come in one day, death, and mourning, and famine;
and she shall be utterly burned with fire:
for strong is the Lord God who judgeth her.”
(Rev. 18:8)

In February 2015 an extraordinary threat was made by the bloodthirsty Islamic terrorist outfit known as ISIS (the Islamic State of Iraq and Syria, now going simply by the name of Islamic State).  In a very short space of time, this evil, murderous organisation has spread across a vast swathe of territory, massacring people along the way in extremely brutal and sadistic ways.  It is intent on establishing an Islamic state across the entire region.  And having expanded into Libya in North Africa, and having taken control of Benghazi, Libya’s second city, it is now just south of Italy, which with 2.2 million Muslims has the fourth-largest Muslim population in Europe.  The Italian island of Lampedusa is a mere 109 miles away from Libya, and Sicily is just 300 miles away.

The threat, made in an online video, was this: “Today we are south of Rome.  We will conquer Rome, by Allah’s permission”.  He said this just after the same video showed ISIS terrorists beheading 21 Egyptian Copts (Coptic “Christianity” is not true Christianity, but Islam views all who call themselves “Christians” as being Christians).  It is believed that the beheadings occurred in Libya.

Other threats were made as well.  On Twitter an ISIS supporter named Abu Abdullah Britani wrote, “We Are Coming O Rome with slaughter.”  This message was followed by another which read: “We Are Coming O Rome, we will conquer and establish the justice of shariah.  We will use your leaning tower of pizza [sic] to throw off homosexual.”[1]

Also, in October 2014 ISIS superimposed images of the ISIS flag flying over St Peter’s Square in the Vatican, in its magazine, Dabiq.

The threats were taken very seriously by Italian security forces, and by the Vatican itself.  After the video threat was made, Italian security chiefs approved putting 4800 soldiers on the streets of Rome at sensitive sites, such as tourist and archaeological sites.  About 500 soldiers were deployed to increase protection at diplomatic residences, Jewish schools and synagogues.  And in the Vatican City itself, the commander of the Vatican’s Swiss Guard said his forces were ready to defend the pope of Rome if ISIS attempted a strike.